We Do the Jobs That Others Can’t 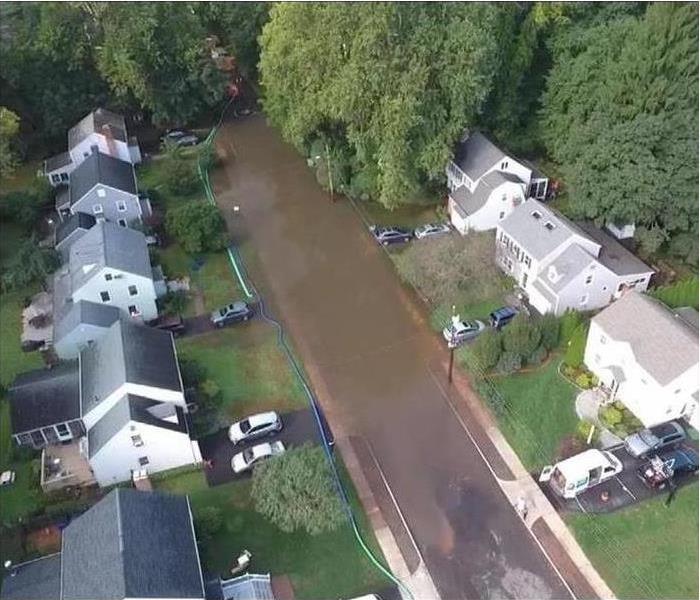 Sewage floating in the street ... five feet of waste water in basements ... almost two dozen homes affected. Now that’s a disaster, and one that demands swift and thorough action!

SERVPRO of Manchester/Mansfield recently partnered with two other nearby SERVPRO franchises (owned by the same management team) to clean up a water disaster that numerous other disaster remediation companies couldn’t handle. It began on October 3, 2018 in West Hartford, Connecticut when the region’s water authority was replacing old water and sewer lines. A 60-foot-long section of newly-installed pipe liner collapsed after a rainstorm, causing a blockage that forced waste water into the street. The basements of more than 20 homes up and down the street were flooded, some by up to five feet of water, and four families were displaced.

When the SERVPRO team was called to the scene, they discovered a street filled with brown water and homes inundated with the foul-smelling biohazard. They set to work pumping out basements, drying out structures and property and removing damaged items.

Crews and equipment from all three SERVPRO franchises owned by Ralph and Noemi DiCristofaro joined forces to tackle this extraordinary and rapidly-worsening disaster: SERVPRO of Bloomfield/Enfield, SERVPRO of Manchester/Mansfield and SERVPRO of Glastonbury/Wethersfield. Our sizable resources of equipment and manpower mean we can respond quickly to disasters of just about any size and type: thousands of pieces of equipment, scores of vehicles and more than a hundred professionals. Essential to our work on the West Hartford sewage disaster was our expertise in biohazard cleanup: we are trained in and adhere to all OSHA and state health regulations.

Although other disaster remediation companies were called to the scene, each one dropped out of the project after initial work—they simply weren’t up to the task. In the end, SERVPRO cleaned the majority of the affected houses, drying and disinfecting structures and property. On this incredibly tough and urgent job, SERVPRO safely and promptly restored homes, property and lives.

Other Helpful Blog Posts from SERVPRO of Manchester/Mansfield

SERVPRO of Manchester/Mansfield publishes educational articles on how Manchester and Mansfield residents can protect their homes and businesses from disasters and how to deal with mold, fire, water, sewage, storm and other damage.

Water Disaster? Use the Pros

Flood and Sewer Dangers Most People Don’t Know About

You may be interested in these articles from SERVPRO of Bloomfield/Enfield and SERVPRO of Glastonbury/Wethersfield.

We’re Here for You